You are here: Home / Products / Pebbles 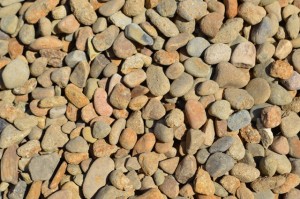 River pebble 20mm are riverbed stones that vary in size with a maximum diameter of 20 mm. This type of pebble comes in a range of earthy colours which are mainly brown and grey. River Pebble 20mm is great for garden beds or footpaths because it brings a really natural look to the environment and is safe to walk on. Like Mulches, they provide coverage to retain water and stop weeds from growing with the added advantage of not breaking down. 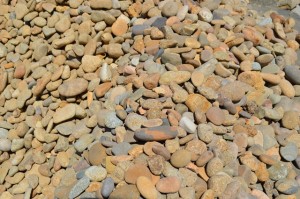 River Pebble 40mm is made from fairly large stones pulled straight from the rivers of Australia. With a maximum diameter of 40mm, it is a great stone to display in your garden if you are after a more natural look. River pebble 40mm can provide coverage in the garden for weed prevention and water retention similar to mulching and because of the larger size, they are less likely to be shifted by weather or other conditions.

A great idea is to mix the 40mm and the 20mm River Pebble together to get a contrast in sizes creating a nice feature and depth to the area. 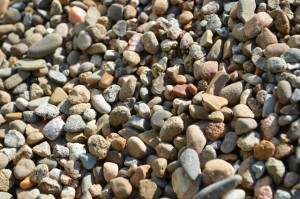 Pea Gravel is the smallest member of the River Pebble family ranging from 5 to 14 mm wide. It is brown and grey in colour and is gathered from a river bed. Like River Pebble 20mm they are also great for in-between paths and because of the size, they compact underfoot well making a solid surface to walk on. Although traditionally they are used in the yard or garden they can be a great addition to fish tanks and ponds. 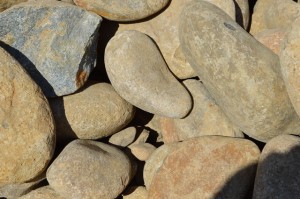 Ranging from 100 to 450mm wide Lucky Stone is the largest of the River Pebbles, these stones are great for feature areas in the gardens, ponds or even mix in with the smaller sizes such as River Pebble 20mm and River Pebble 40mm for depth and contrast. Like its family, the colour of Lucky Stones ranges from dark browns to greys.

Lucky Stone, in the past, has been purchased as pet rocks for children which is just another great and creative use for the stone! 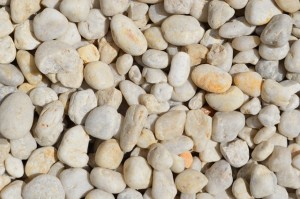 One of our most popular products White Pebble can transform any garden into a regal courtyard, they really do make areas come to life. Also known as Cowra White (Pebble) their off-white colour with golden and grey veins really contrast against the greens of most plant life OR against dark features pavers of your yard. The smooth pebble is also safe to walk on if it’s being used between pavers or near high traffic areas. White Pebble 20 mm has a non-porous surface which means they won’t change colour or get moldy. 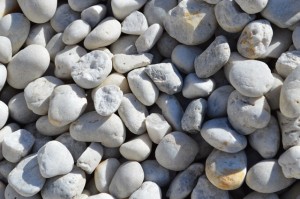 White Pebble 40mm also called Cowra White Pebble is a smooth off-white stone that can transform gardens from plain to Royal. The colour contrast of the green and white really make any garden look expensive and is safe to use in garden beds, paths, and pot plants. Being a larger size these stones are less likely to be washed away or shifted by weather conditions. 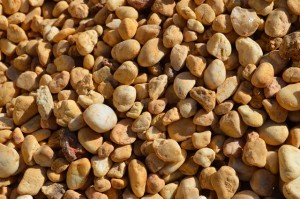 Also known as Cowra Gold Pebble, Gold Pebble 20mm is a smooth 20 mm stone which is gold in colour with white veins. The contrast between the deep gold of the pebbles and the greenery of the garden gives any yard a striking aesthetic look. Gold Pebble 20mm is a suitable and safe option for yards with high foot traffic, children and pets. The main areas that Gold Pebble is generally used in are; garden beds, in between pavers and in pot plans. 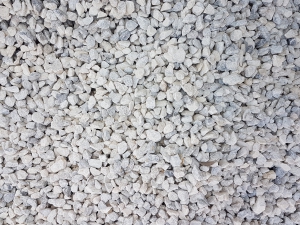 Crushed Cream Gravel is the cheaper alternative to the white pebbles, this product consists of 20mm stones that have been chipped off the main vein and crushed. They can vary in colour from white-cream to a deep grey. Because they are haven’t been tumbled by rivers like the other pebbles they can have sharper edges so we don’t recommend using this type of pebble between pavers or as a footpath because they can hurt underfoot. Crushed Cream Gravel does look amazing in garden beds and as a feature area because of the colour contrast that it creates, strong whites against deep greens.

Your Garden, Our Passion